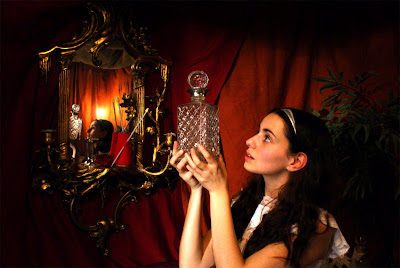 Following outings at the Edinburgh Fringe and Southwark Playhouse in January 2011, Belt Up Theatre's The Boy James returns to London running at The Goldsmith on Southwark Bridge Road from 26 January to 11 February 2012.
An original story inspired by Peter Pan and the life of JM Barrie, The Boy James is a dark, beautiful tale of one boy’s awakening to the harsh realities of adulthood. Play with him, and take his hand as you lead him back to Neverland.
Jethro Compton returns to the role of The Boy, alongside Serena Manteghi as The Girl and Dominic Allen as James. Staged as part of Southwark Playhouse's 'Out and About' programme, the show makes a new home above a bar and restaurant originally built as part of the London Brigade Fire Station. In typical Belt Up style the space is transforming into a fully formed immersive environment.
Belt Up Theatre give us their five reasons to see the show.
1. It made Stephen Fry cry
In 2011 the world’s favourite polymath, egged on by some Belt Up fans, came to see The Boy James at Southwark Playhouse. As with many audience members, the show struck a chord and led Fry to tweet, "Just been knocked out by The Boy James, Belt Up's interactive show about JM Barrie… Still drying my eyes."
2. An original story inspired by Peter Pan and the life of JM Barrie
There is something about the work of JM Barrie and the story of Peter Pan that manages to reach the inner child of every audience member; the idea of not-wanting to grow up is universal. The Boy James is a dark, beautiful tale of one boy’s awakening to the harsh realities of adulthood.
3. It was created by the award-winning Belt Up Theatre
Belt Up has been working across the UK over the last three years. Their unique style of performance has created a great following and a number of shows including The Tartuffe, The Trial, Lorca is Dead and Macbeth which was staged in the House of Detention in Clerkenwell and will be returning later this year.
Belt Up has been hailed as a company "changing the future of British theatre" by the Observer and as Edinburgh "Fringe Royalty" by Time Out.
4. It has some amazing reviews
The show has been running now, on and off, for a year and a half. Over that time it has received some incredible write-ups including three four-star reviews from Whatsonstage describing it as "a magical experience" and "flawless". It has also been called "moving and beautifully played" by writer Neil Gaiman, and called everything from "riveting," "wonderful" and "superbly realised" to "Belt Up’s finest performance" by reviewers from The Stage, The Scotsman, Fest Mag and Edinburgh Evening News.
5. It’s your last chance to see it before the show flies off to Australia
After the enormous success of the show in the UK, the company is heading off to Australia for a month-long run at the Adelaide Fringe Festival. Unless you fancy a trip to South Australia, be sure to book your tickets for the London run whilst they’re still available.
The Boy James opened at The Goldsmith on Southwark Bridge Road on 26 January where it continues until 11 February 2012. Tickets are available from the Southwark Playhouse box office.
-----
This has been taken from Whatsonstage.com
Posted by BeltUpTheatre at 09:30