A Little Princess Comes to London

The third and final part of The Drawing Room trilogy, A Little Princess, is coming to London for three performances only.

A Little Princess brings Frances Hodgson Burnett’s classic novel to life. Join Sara Crewe as she is torn from her life in India in a journey from princess to pauper. Left without her father in a foreign land; comfort her, listen to her tales and relish in the magic and the tragic beauty of her story. A stunning adaptation of a well-loved novel. 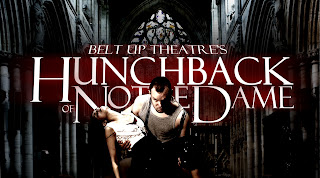 We are absolutely thrilled to announce that tickets have gone on sale for Belt Up Theatre's Hunchback of Notre Dame in Selby Abbey in North Yorkshire.

Jethro Compton Ltd will produce the site-specific production of Victor Hugo’s classic novel Notre Dame de Paris in Selby Abbey in 2012 involving a professional team and a number of community performers (choir, bell ringers, organists) that will be supported by local businesses and enterprises.

Belt Up Theatre’s Hunchback of Notre Dame is a vivid recreation of Victor Hugo’s timeless tale of longing, passion and unrequited love. The production is inspired by a previous version performed by Belt Up Theatre, company in residence at York Theatre Royal, who have been hailed by York Press as 'the future of theatre’ and The Observer as ‘bright young things changing the face of British Theatre’.

The Arts Council England has awarded funding to the project, which will run for a week at the end of 2012. The company will run workshops for local schools and public workshops in the lead up to the performance.

‘I’m absolutely delighted that we are able to go ahead with the production. We’ve been working with the Abbey, Creative Selby and Selby Chamber of Commerce for the best part of a year now and it’s just fantastic that all that hard work has paid off. The Abbey is such an incredible, historic landmark; we’re all thrilled that we’ll be able to make the show there.’ Jethro Compton – Producer and Writer.

The former show, titled as ‘Quasimodo’ has had critically acclaimed sell out runs at the Edinburgh Fringe Festival in August 2010, The Lowry in Salford Quays earlier in 2011 and Southwark Playhouse, London in 2010.
‘a clever, claustrophobic, psychological horror’ **** Time Out London Critic’s Choice
‘an intense adaptation of Victor Hugo's Notre Dame de Paris’ **** The Scotsman
‘dark and compelling… fantastic’ **** Manchester Evening News

The cast includes Dominic Allen as Archdeacon Frollo, Serena Manteghi as La Esmeralda and Sam Donnelly as the hunchback, Quasimodo. The production will be directed by David Calvitto who directed Belt Up's Macbeth in the House of Detention earlier this year.