Review from the York Press: 'Atrium' & 'The Boy James' 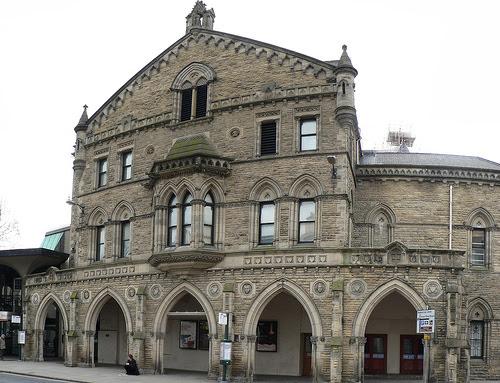 THESE two new plays from the York Theatre Royal company in residence made their debut at the 2010 Edinburgh Fringe as part of Belt Up Theatre's bold project The House Above: ten devised works performed in different rooms of a purpose-built house.

They are united again this week, each staged in a cluttered study and linked by not only a common theme of the artistic mind, life and loss, but also a desire to release the imagination and heaps of audience participation. A couple of the cast overlap too, as do certain actions, such as pouring a drink from a decanter and hitting a head violently on a table, and the influence of fantasy is pervasive.

Written by James Wilkes, the charming yet anarchic orchestrator of Belt Up's reinventions of The Tartuffe and The Beggar's Opera, Atrium comes from the experimental end of the company's spectrum: the absurdist Monty Python/League of Gentlemen end that more divides opinion like Marmite.

Wilkes blurs the line between fact and fiction on a "surreal journey through the subconscious mind of ageing artist Malcolm Kinnear as his self-obsession tears apart the life around him". Such a part could only be played by Belt Up's master of the deluded, the deranged and the despicable, Dominic J Allen, a provocateur with Macbeth and Mr Peachum on his CV already.

Under the direction of Jethro Compton, he is an even looser cannon here, and yet such is Allen's dangerous energy, quick wit and cabaret MC skills that he keeps you onside as Kinnear indulges in flights of fancy to drive beyond distraction his biography writer, Paul (or is he Simon?, as he equally often calls him), played by Wilkes. The women of the piece,Serena Manteghi's Pennie in a hotdog suit, and Lucy Farrett's servant girl Butter, are pulled hither and thither by Malcolm's twisted need to make his life sound more interesting.

The play follows the same trajectory, never quite climaxing. However, then comes one of the best pieces in Belt Up's rapidly expanding portfolio, Alexander Wright's The Boy James, a haunting story of playful innocence and cruel experience woven around the life of Peter Pan author JM Barrie, directed with devastating impact by Allen. 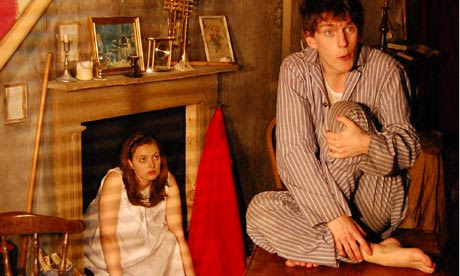 Initially, the audience is cajoled into childhood games by Jethro Compton's pyjama-clad, wide-eyed Scottish boy James, but playfulness makes way for darker materials: the harsh arrival of adulthood, as represented by Wilkes's older James and Farrett's Girl undergoing her sexual awakening under the influence of "poison" (alcohol) with an unwilling boy James. The inner child in us all slinks away, crushed by the innocence-terminating letter from the adult James, read by a man drawn out of his front-row seat by the boy's pleading.

No wonder a certain Mr Stephen Fry felt moved to tweet "Just been knocked out by The Boy James. Still drying my eyes" upon seeing it last year. A second Edinburgh run and five-star reviews await from August 3 to 29.

More information can be found at www.beltuptheatre.com
Posted by BeltUpTheatre at 03:36 No comments: 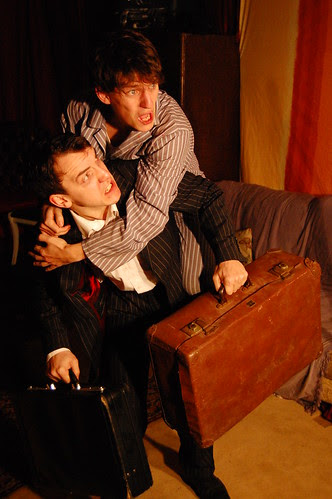 Belt Up are never going to please everyone when they experiment with what theatre can be in 2011. But then, you can’t make an omelette without breaking a few eggs. Actually, they don’t make an omelette during their double bill of new writing, although an egg does get broken during a delightfully ill-advised juggling incident.

First up is Atrium, a slippery little play about unreliable narrators. We are personally greeted by born entertainer Malcolm Kinnear (Dominic J. Allen), a man intent on having his life written up into a best-selling book; the thing is, he doesn’t so much play fast and loose with the facts as consider them wholly irrelevant to the story he wants to tell. Atrium’s playwright James Wilkes spends a great deal of time on stage as ghost-writer Paul, trying to coerce Malcolm into cooperating. The levels of meta-theatricality range from the disturbing to the absurd to the hysterical, and at times it’s like a cross between Luigi Pirandello and Harry Hill. For some, it will seem ludicrously indulgent, and many will struggle to keep up with the labyrinthine plots. But then, that’s sort of the point: the audience both shares the frustration of the painfully put-upon writer and revels in the central character’s irrepressible lies; both are, in fact, a pleasure to watch.

The second half of Belt Up’s evening is Alexander Wright’s The Boy James, which explores the state of mind irrecoverably lost in the transition from childhood to maturity. Drawing on the life of J. M. Barrie, Jethro Compton gives a flawless performance as a little boy desperate to remain just that, strongly supported by Lucy Farrett as a girl all too eager to give up her innocence. With audience involvement not merely encouraged but entirely necessary to the plot, the piece combines the beauty of youth’s simplicity with the sharp sting of disenchantment. My one complaint is that The Boy James, like the sense of youth it captures, is all too short, and some of the poignancy of the conclusion is lost in its abruptness. Although, because this is Belt Up, you’re allowed to take matters into your own hands: wanting to linger longer in the moment, I stayed until the rest of the audience had left so I could do something I’d been desperate to do throughout the performance – namely, give a lost boy a comforting hug.

Theatre should make you want to leap out of your seat and intervene, and this talented company allow you to do just that. Belt Up don’t want applause, they want to make you feel, and surely there is no nobler goal for theatre to strive for. While these pieces of new writing aren’t perfect, they are diamonds in the rough: York can feel justly proud of its homegrown talent.

'The Boy James' will feature as part of Belt Up's Season this summer at the Edinburgh Fringe Fesitval. More information via http://www.beltuptheatre.com/

Posted by BeltUpTheatre at 03:08 No comments:

'The Importance of Adventuring' 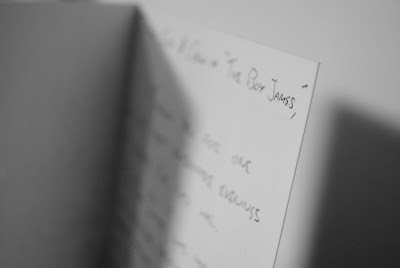 A card from a member of the audience who came to see 'The Boy James' in January in London:

Thank you for one of the most enjoyable evenings of theatre I've ever had.

'The Boy James' was horrific and beautiful; despite the dark subject matter, I left feeling happy. Perhaps I was reminded of the importance of adventuring.

Details of upcoming performances of 'The Boy James' can be found at www.beltuptheatre.com
Posted by BeltUpTheatre at 11:31 No comments: 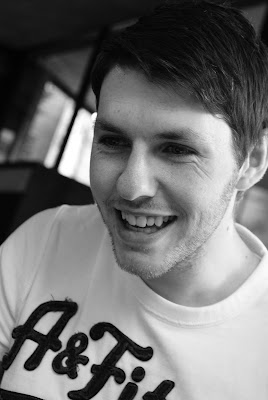 Since making first contact with Belt Up in February I have been waiting in anticipation and nerves about coming to York to work on two acclaimed shows Atrium and Boy James. After seeing the work during Edinburgh fringe in 2010 and 2009 I have been itching to be involved and now heres my chance. I am full of nerves and excitement for the two weeks ahead in York theatre royal meting and working with a lot of talented people and trying not to freeze and actually do a decent job.

I am coming to the company with a small amount of experience in Production but what I lack in knowledge I can hopefully make up with cups of tea. Being described to the twitter community as the new tea boy on your first day does hold some level of expectation. 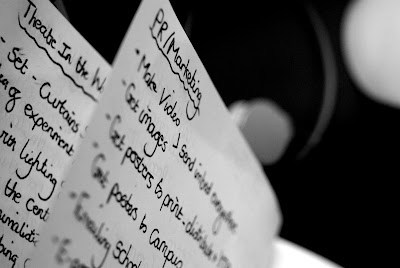 I am currently residing in Edinburgh whilst completing BA Hons Drama and Performance at Queen Margaret University specialising in Contemporary Performance and Arts Management. Becoming a jack of all trades master of none, but hopefully becoming more employable in the process. Away from Edinburgh I am originally from Dudley West Midlands home to some of the countries great performers Julie Walters, Lenny Henry, Frank Skinners, and Matthew Williams. Ok maybe not frank skinner but you get the jist. Coming t York is a home away from home with good food good beer and an awful accent, safe to say I think I will fit in pretty nicely.

Not only will I be working on the shows in York but also very delighted to be working with the company in Edinburgh on 2 brand new pieces, which I am thrilled about. Not only the opportunity to work again with the company but at such a great theatre festival. However part of me thinks it’s the least they can do as I am housing the company for the month (that may have something to do with the job but hey ill take what comes my way)

Safe to say I’m stoked to be working with the company and bring on whatever may entail in the months ahead.