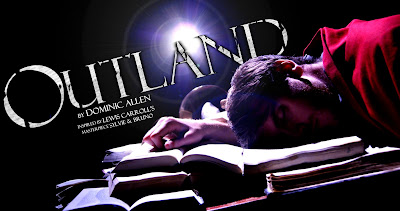 How did you come up with the idea for Outland?
The idea of Outland came to me while I was on the train on a very nice day. We had been talking about the potential of a sister piece to The Boy James and as I was watching the landscape roll past the train window, I couldn't help thinking about Lewis Carroll; how fun it would be to write a play that's about his work and his life, which he appears in. I thought an adaptation of Alice would be a bit predictable and so I had a rummage around in the hope of finding something people don't know so well. I came across Sylvie and Bruno, in which he's already written himself into it more or less (it's quite subtly done) and, ironically, one of the earliest scenes is on a train. So that was that.

What do you look for when thinking about writing a new piece?
When I'm trying to write something new I'll become super-absorbent. I'll soak up and scrutinise everything I see, or hear, or come across and ask myself how it could fit into a story. Sometimes nothing sticks together and therefore nothing gets written. But then, on occasions such as with Outland, I think to myself 'Hang on, that might just work'. It has to excite me and it has to make me think that it's going to be worth the time and toil I'm going to have to put in, because I know I always get to a certain point when writing a play where I wish I'd never started. So, in short, it's got to have something that hooks me and something about it that's going to keep me going.

How does Outland compare with previous plays you have written?
I'm very interested in writing about historical figures and in historical settings. Lorca is Dead, for example, was made up entirely of real people. So in Outland I have that same sort of challenge to get to grips with Lewis Carroll's life but, also, I have a lot of leeway to play around with it and make stuff up. So, it has a few connections to other stuff but I think, on the whole, Outland will be a new direction for me.

If you could sum up Outland in 3 words what would you say?
I'd use a quotation from Hamlet (Act III, sc i) : '...Perchance to dream'

What can audiences expect from Outland?
They can expect a lot of typical Carroll nonsense and characters; there's a fair bit of Wonderland and his obsession with puzzling logic. However, you'll also meet some new characters, if you're not familiar with his more obscure work, and perhaps another much more profound, sentimental, philosophical side to him. The play has its surreal, absurd moments that you'd inevitably expect but it's also touching, sweet and introvert.


What do you believe creates a good piece of theatre/writing?
A good piece of theatre relies on taking the writing and making it into an experience. That experience needs to rhyme with the text and help externalise what's going on for the characters. Any play where you come out feeling very sorry or very happy for a fictional character is always a good play, and if it's possible to make that experience unique for each audience member, then all the better! As for good writing, I think that relies on telling a good story and telling it well. Keeping the audience on their toes and keeping them engaged. It's not just what you say but how you say it.

OUTLAND runs alongside THE BOY JAMES and TWENTY MINUTES TO NINE at the Edinburgh Festival Fringe this summer.

More details can be found at www.beltuptheatre.com