It’s been a busy 2010 so far for Belt Up Theatre but life is about to get a hell of a lot busier at the end of the week when we enter our boot camp style rehearsal process for our ‘The House Above’ shows this coming Edinburgh.

It’s about half way through the year and so we thought we’d do a little bi-annual review of everything we’ve been up to so far... 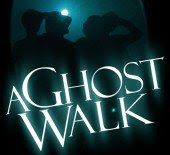 1. A GHOST WALK
Our first official show as residents of York Theatre Royal, playing throughout February on the very cold streets of York. This intimate play, based in the context of a traditional haunted walking tour, accidentally became our most controversial show with about two complaints per night (out of an audience of 20). The reason being that a lot of people weren’t aware it was a play and thought it to be just a normal Ghost Walk. When the main character had a mental breakdown over the recent loss of his father, audience members complained to the York Theatre Royal for making this poor man work in such an unstable state of mind – often people refused to believe it was a play even when they were told.

2. COLLABORATION WITH PUNCHDRUNK ENRICHMENT AT NSDF10
In 2008, Belt Up debuted at the National Student Drama Festival with a production of ‘Metamorphosis’ (a new revamped version of which with a brand new adaptation is returning with Belt Up to The House Above) and two years later we were invited back to the festival as visiting artists. We were set the task of collaborating with Punchdrunk Enrichment’s Peter Higgin to devise a durational piece that demonstrated an alternative form of theatre. The result was the Bensalem B&B otherwise known as ‘The Order of Atlantis’. The premise was that 14 or so weird and wonderful characters had arrived in Scarborough as a sort of a waiting area before passing on to a mythical world. Throughout the week they would meet and chat with the festgoer’s (those brave enough to approach them) and the lucky ones were invited to the Bensalem Bed and Breakfast to learn more about the Order. The really keen audience members ended up spending a great deal of time in the ‘B&B’, a huge, beautiful empty Victorian house learning about the intricate stories connecting these strange characters. It was received extremely well with audience members immersing themselves almost entirely in the world we had created – one audience member possibly solved time travel in a bid to uncover the villainous Professor Higgs... 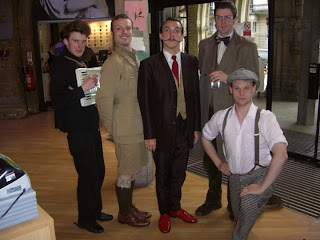 3. 'LORCA IS DEAD: OR A BRIEF HISTORY OF SURREALISM' AT YORK THEATRE ROYAL
As a Research and Development period for ‘Lorca is Dead’ (one of the shows heading up to Scotland for ‘The House Above) we inhabited the York Theatre Royal studio and foyer for most of a week at the beginning of May. The purpose was to experiment with audience interactivity and how they can best gain agency over a piece of theatre. This involved many talkback sessions, four public performances, open rehearsals and lots of hanging around York as the Paris Surrealist group. The result was a transformation of the play that we performed at the beginning of the week; ending up with a show where the audience could be accommodated to do whatever they wanted, even play the protagonist. This period was vital in the shows development and certainly means that audiences in Edinburgh are in for quite an incredible experience come August.

4. OPENING OF JOSEPH ROWNTREE'S NEW SCHOOL
In mid-May, we had the delightful task of coordinating the opening ceremony of the new Joseph Rowntree school building in York. This involved working with almost 100 secondary school pupils towards a spectacle of song, dance, singing and of course some Belt Up style grotesquerie. 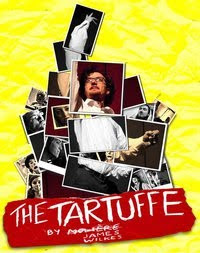 5. THE FINAL TARTUFFE
The Tartuffe was performed a handful of times in 2010 in everywhere from Bude to Great Wyrley, South Staffordshire though it received its final performance in the York Theatre Royal main house on the 25th of May. In the previous post is a more detailed farewell to the show. The final performance saw the main character, Orgon Poquelin, head of the anarchic troupe kick the bucket onstage in an incredibly self indulgent (within the context of his character of course) death scene set to ‘Zadok the Priest’. 600 screaming fans and a handful of disgruntled people expecting Moliere were present to see the end of a Belt Up era. 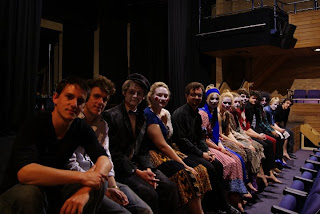 As part of the National Independent School’s Drama Association conference in June, we were invited to be the resident practitioners working with the NISTC (National Independent School’s Theatre Company) towards a short performance at the end of the weekend. This was a lovely process in an extremely sunny Warwick with a brilliant troupe of actors. The end product was a meta-theatrical and interactive production of Pinocchio performed by a group of ghostly performance types ranging from puppeteers to 60s rock gods. 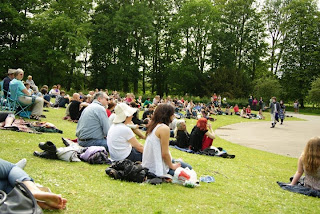 7. A MIDSUMMER NIGHT'S DREAM
In what has now become a Belt Up tradition (if two years running can be called a tradition?) we assembled a huge company of actors to perform an outdoor family friendly Shakespeare in the sunshine. This year’s was A Midsummer Night’s dream directed by Marcus Emerton (Tartuffe in ‘The Tartuffe’, Andre Breton in ‘Lorca is Dead’) who also took on the role of Bottom. The show was a wonderful success with beautiful sunshine in York’s Rowntree Park and very enthusiastic audiences. A perfect summer’s day out!

That brings us pretty much up to date for 2010. Now we’re preparing ourselves for 12 hour work days and a month of rehearsal... It’s going to be worth it though. There’s no place like our home.