What The Audience Think... 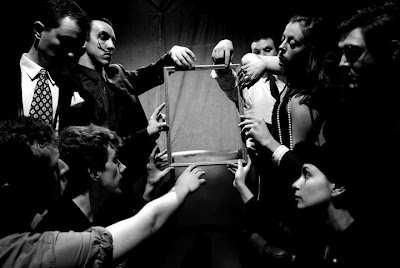 We asked you for your thoughts on Belt Up and your experiences over the last few years.

Here’s the first in from Andrew Skipper.

‘During this years Edinburgh fringe I was dragged, somewhat hung over and unwilling, to see a production I'd never heard of called Lorca is Dead, I had no idea who you were and had never seen any productions before, the only prior knowledge I had was of reading Lorca's Blood Wedding which i didn't even like

Needless to say I left the venue that night amazed, I loved your production and was astounded by the style in which you performed it. I was so blown away I found a similarly unwilling university friend of mine and bought her to your final night at the Southwark playhouse. This time I knew what to expect so I made sure to sit right in the action on the floor and because of this I; had my face stroked by Dali, performed the elephant, had Dali and Gala lying on top of me and my friend was brought up to read some of the lines behind Breton's desk.

She was just as amazed as I was the first night I saw it, in fact this was better than Edinburgh for a few reasons but mainly because of the lack of clapping at the end, in Edinburgh someone started a round of applause which I found didn't feel right but this performance went perfectly and we left the theatre that suitably distraught and in awe.

One moment that has stuck out in my mind is the ending image of Breton behind his desk, distraught and broken, in both performances this was a brilliant piece of acting which I couldn't look away from, so much so that I remember seeing the actor playing Breton out and about in Edinburgh the next day and feeling very odd in need because as a company you created a level of character realism which I haven't seen matched to date and seeing caught me off guard!

Unfortunately being students we couldn't afford to stay for Atrium afterwards at Southwark but have just bought tickets to the final show of The Boy James on the 28th, which we are highly looking forward to.

So many thanks Belt up, for a wonderful performance and giving us a kick of inspiration which is helping with our own work at university!’

If you want to send us your thoughts then drop us an email on info@beltuptheatre.com.