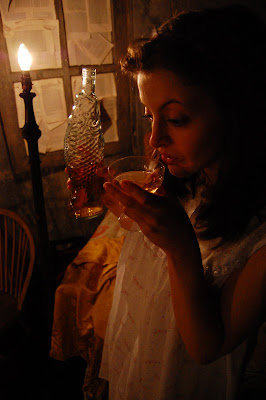 So we had another handful of reviews come in over yesterday and today. Here is glimpse of what they had to say...

**** from whatsonstage:
'Belt Up have a knack for conjuring moments where hand flies to mouth in shock'


There Ought to be Clowns:
'thoroughly enchanting'
British Theatre Guide:
It's a nice review but there aren't really any good quotes from it. Here is a link so you can read the whole thing if you feel inclined to do so.


As The Times don't allow you to read their reviews without first giving them money very few people will be able to discover this review. So here it is in full:

To die will be an awfully big adventure,” Peter Pan famously declares. Yet in Alexander Wright’s hour-long play about Peter’s creator J. M. Barrie, staged by the immersive-theatre specialists Belt Up, death, both literal and figurative, is a source of scarring trauma. Directed by Dominic J. Allen, the piece attempts to tug its audience back into the world of childhood imagination, where enchantment lies, but beyond whose borders the terrifying adult domain lurks in wait. It’s occasionally harrowing, but the participatory element creates a self-consciousness that sometimes acts as an unfortunate barrier to involvement.

The setting is a small, cosy room that is part Edwardian study, part child’s den.
Overstuffed sofas and cushions provide audience seating, the ceiling and walls are hung with blankets and piles of books surround the oak desk. Here we encounter an eager-eyed Scots boy in striped pyjamas who winsomely cajoles us into playing with him: first, a game of tag, then I Spy. This had my personal inner child drumming her heels with impatience. Happily, the narrative livens up, with the arrival of a nightdress-clad, sulky-looking little girl who bursts in through the fireplace, and then of James (James Wilkes),dour- faced and haunted in pinstripes, the grown-up incarnation of our youthful host. Boy and man face one another, the first longing to be taken on a new adventure, the second insisting on agonising and perhaps overdue separation from his younger self.

The girl (Lucy Farrett), with the spite and mischief of Tinkerbell, dares the boy to drink “poison”, James’s whisky, before sexually assaulting him. It’s a startling and painful journey from innocence to experience.

Peter Pan is, of course, the boy who never grew up; and there are echoes, too, of Barrie’s own intriguing life. The death of his elder brother when Barrie was six and his allegedly asexual adulthood both seem to have informed Wright’s play — which could usefully have given such ideas more room for development. There’s also a whiff of sexism to the girl’s portrayal: in her demands to play house or mummies and daddies with the fearful and reluctant boy, and her threat to burn down Barrie’s study, there’s a faint suggestion that women are the natural enemy of male creativity. The performances, though, are persuasive, particularly Jethro Compton’s poignant boy; and when it’s not trying too strenuously to charm, the production has a penetrating melancholy.
Posted by BeltUpTheatre at 14:11