Quasimodo is playing for two weeks at The Lowry, 1st - 12th Feb
www.thelowry.com/beltup 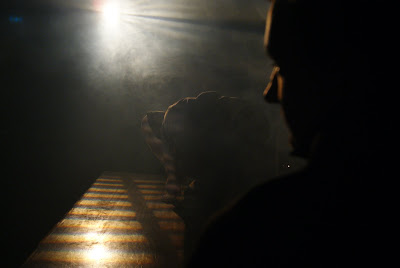 INTERVIEW WITH JETHRO COMPTON, writer and director of Quasimodo

What are you hoping the audience will take away with them?

I don’t know. I’d hate to say that ‘I’d like the audience to look at people differently, to look past ugliness’, I think that would probably be a little pretentious. I guess if people can feel sorry for him in spite of who he is, of what he is, of what he does, that’d be great. I’d be really interested to see what people make of Frollo, he’s always seen as the real baddy. I’m not sure he is. Not in the novel, and not in this adaptation. He’s the politician that everyone’s happy to hate, if people can see the man behind that, that’d be great too.


How does Quasimodo differ from the other shows in the Belt Up repertoire?

The audience are cast as a role, not as in other Belt Up shows where you might get cast as an individual, but as a whole. It’s like a story told underneath a magnifying glass. In other Belt Up shows you’re asked to sit side by side with the characters, to go on a journey with them. In Quasimodo you’re asked to be the jury, to sit and observe the characters from a distance, and eventually to judge them.


What was it that made you want to adapt Notre Dame de Paris?

I’ve always loved the story. It’s a story that everyone can relate to. It’s simple and honest. It’s obviously a little more dramatic than reality, but the themes are simple. The themes are about love, about desire and lust, about rejection. It’s not the fairytale that everyone expects. It doesn’t end happily ever after, our hero doesn’t ride away into the sunset, girl in arm, to life happily ever after. He loves the girl, he’d do anything for her, she’s everything to him, but she loves someone else. I think that’s something that everyone experiences at least once in their life.


How faithful an adaptation is it? What can fans of the book expect?

One of the key things with all Belt Up adaptations is that they aren’t just versions of a story, they really do adapt the source into something new and different. That’s what I’ve tried to do here. I’ve tried to dig past the architecture of Paris that Hugo’s novel obsesses with and find the story that everyone really knows, and then I’ve twisted it. I’ve given it the Belt Up treatment, so to speak. I want to give the audience something different than they’ll get from any other version. There are little bits of the novel hidden away throughout the play, little treats for fans of the novel. But if you go in with no idea who Quasimodo even is, that’s not a problem at all, it doesn’t assume anything is a given. So I guess the overall story you get might not be totally faithful, but the emotions from the novel are there, the love is there, and the pain and suffering and the desperation is there. The essence of the novel is all there.
Posted by BeltUpTheatre at 08:38