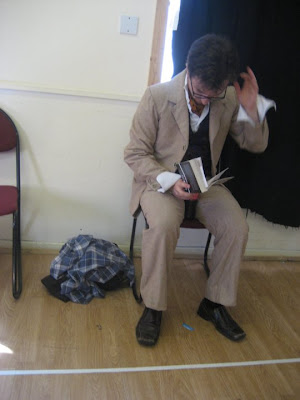 You’re back in the directing chair at Southwark Playhouse after Lorca is Dead in November. What’s different about The Boy James?

The Boy James has been a much more intimate directing experience, partly because the cast is so much smaller (three actors instead of eight) and also the tone and texture of the piece is sort of the opposite end of the spectrum. Something the two plays have in common for me as a director is that they both require the audience to be given a helping hand on the journey. In Lorca, for instance, there was a lot of assumed knowledge about surrealism and history that it was important we made sure everyone in the audience was able to be filled in on things they missed. The Boy James doesn't necessarily assume any prior knowledge about anything but the subject matter can be somewhat oblique. This is the great joy of the piece; it's mysterious, intriguing, sinister – so it's important to make sure the audience are with us all the way so they get the full experience by the end.

Is it hard to switch between the two styles, the madcap nature of Lorca and the intimate tragedy of The Boy James?

One of the good things about having done Lorca immediately before Boy James is that I feel I've got a bit of practice in when it comes to pulling at the heart strings. Although Lorca had its topsy-turvy moments, it also had an emotional centre. The Boy James is very similar in this respect except the melancholy is more profound and perhaps more immediately visible. So, in a way, I guess it's not as hard as it may first appear. It's been an interesting learning curve though, taking the plunge into these darker areas.

Belt Up’s shows are typically interactive and involve the audience in the story. What is the audiences place in The Boy James?

It suits the piece that it's never made explicitly clear who the audience is or what they represent. The cast and I have got our own ideas about that, of course. The important thing about the audience's place in the play is their journey with the boy. They enter as old friends – perhaps even imaginary friends, or memories – and some audience members can expect to be cast in certain roles but their involvement will shift as much as the boy's experiences shift. You'll have to come and see for yourself where the audience end up.

Belt Up works at break neck speed, coming straight to Southwark after a rural tour of Octavia. How do you find the time to get a show back up and running?

It wasn't half as bad as I was expecting, actually. We had to rehearse in a new actress (Lucy Farrett, taking over from Veronica Hare) but it was easy for us all to slip back into it. It was also very useful returning to a play that's already had a good month long run in Edinburgh because there were things we knew we wanted to change and try out. As we all got back into it so quickly, it gave us some time to put a few new ideas to the test.

You were here in November, what makes The Boy James worth the return visit for the audience?

Because it's not what you'll be expecting. Lorca, Atrium and Quasimodo, even though they weren't directly related, fitted together in a way that's hard to describe. The Boy James on the other hand has something completely different to offer so its worth just coming for a look. It's neither mad nor scary. It's something else...