Thoughts on The Boy James 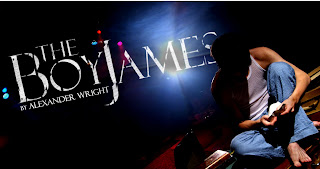 I arrived at my girlfriend’s house the other night and she was sat watching Finding Neverland, one of my all time favourite films. For me it has something truly magical about it, something fanciful which is all too often impossible to capture, but it somehow wonderfully substantial in the film. I’ve no idea how or why, but I find it captivating and heartbreaking.

A friend who was watching too ended up in floods of tears by the end and apologised, almost as if it had taken her by surprise. I remember a few years ago, myself and the rest of the boys went back to my parent’s house for some beer and curry and afterwards watched Finding Neverland. By the end of the film we were all sat nursing our beers in quiet and unexpected tears.

I can’t really remember when or why I wrote The Boy James, but everything to do with Peter Pan seems to be important to me and I’m not really sure why. It’s one of things which seems to resonate with me, not as a play or a story but just as a notion.

A while ago we were doing an interview with someone about our work and what our political views were. I had never really thought about that before, well not explicitly. I think people can only write about what they know, about what they love or have experienced. I could never write something that is beyond my own experience or imagination. I know that seems like an obvious thing to say, but looking back I think this is, perhaps, why Peter Pan feels so important to me.

I’m very lucky and have a wonderful family who I am still very close to. Indeed my older sister works at the Theatre Royal where we are resident. And with my wonderful family I had a wonderful childhood. My sister and I would spend hours lost in play and magical worlds. She would make things up and I would simply believe her because there was no reason not to. This lead to some wonderful times and some heartbreaking ones. There are many photos of me dressed up as whatever she wanted me to be in her stories or plays. I remember that there was a fairy-land that she was allowed to go to but I wasn’t, despite the fact I was dying to. She had a fairy and so did I, mine was called Zack.

The memories I have of my childhood are very fond ones and very happy ones.

In Finding Neverland there is a line which I had forgotten about until recently. Barrie is describing to Sylvia how, when he was a child, he dressed up as his recently deceased brother to try and make his mother happy. He says that that was the first time his mother truly ever looked at him ‘and that was the end of the boy James.’

It’s strange that I had forgotten this line in the film for a few reasons, the most obvious being because it must be where the title of the play comes from. But more than that, it pinpoints the entire feeling behind the play – the whole notion in half a line. If only my writing was that succinct!

Of course, as we all know, Peter Pan is about growing up and not growing up, about the fear of moving out of childhood and in to adulthood. In Finding Neverland, that transformation occurs instantly, without struggle: ‘and that was the end of the boy James.’

I am now, somehow, twenty-two. Somehow twenty-two years have passed and I haven’t really noticed. Without really thinking about it I have gone through nursery, primary school, secondary school, sixth form, university, learning to drive, being allowed to drink, moving out, getting a job, earning a living. I’m years away from the fairytale lands that I used to play with my sister when I was four or five, but I haven’t noticed the change. For me there has been no defining moment for the end of the boy Alexander. Indeed I couldn’t say whether the boy Alexander isn’t the same person who is now twenty-two because I don’t think I feel much different. But at some point I said goodbye to dressing up as part of my sisters games, of playing Power Rangers, of making cardboard boxes in to machines with my dad, of building secret dens under my bed; but I couldn’t tell you when that happened.

I find Peter Pan fascinating because I love fairytales, the simple belief in the beautiful. And I think this might be the same as my retrospective thoughts on childhood, that ability to accept and believe that things are beautiful and fascinating purely because, to you, they are. I think this is something I never want to lose or let go.

What happens in The Boy James is the equivalent of that line from Finding Neverland and is something that has never happened to me and I hope never will; I have no desire to draw a line under my childhood, having to do so would be heartbreaking. I am not willing to bid farewell to my childhood self, as if he is a different boy to the twenty two year old sat writing this, because I don’t think it is.

Peter Pan poses the question of growing up, but this is a notion we have imposed upon ourselves. Of course we cannot play around in cardboard boxes all day every day forever, but who says we have to throw them out?

Alexander Wright - Co-Artistic Director and author of 'The Boy James'