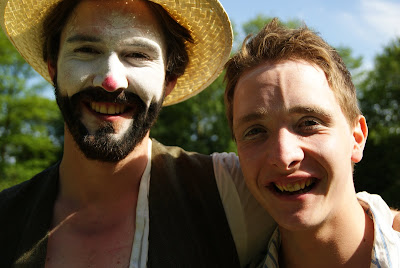 The other day Joe wrote a blog introducing himself as the assistant director for Beggar's Opera.

We realised that there are loads of people who work with us to make Belt Up what it is, and thought you might like to meet some of them.

So you’ve had Joe…here’s Chris White… 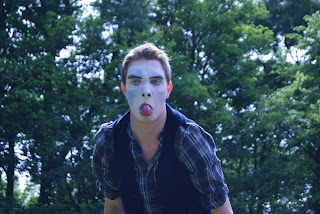 ‘I think it is safe to say, being a part of Belt Up has been one of the best experiences of my life. I remember getting the phone call from Dom to say I'd been successful with my audition, and despite having glandular fever and being emotionally drained from "another" production, I turned into a five year old boy down the phone. Dom will testify I was very excited, I then remember seeing Jethro straight after in a restaurant with Serena, and tried to maintain a coolness, I failed, I was bloody chuffed to bits!

My first show was Lorca is Dead in the Theatre Royal, the first day will always stick out in my mind...An excruciatingly early train from Suffolk in the morning, arrive in York in the rain. But it was all OK because I was going to be working for a professional theatre company, all very exciting... EXCEPT! Nobody had bloody turned up! Some stupid volcano had kept everyone abroad, just my luck! Nevertheless, even though half the cast was missing, it was still brilliant fun "rehearsing". I don't think I've ever laughed as much as that first rehearsal.

Edinburgh, that was unreal. Whenever I talk to anyone involved in theatre about what we did in Edinburgh, they look at me as if I just told them I killed their cat. "Nine shows? Nine shows? You performed in three shows a day?!" Well three shows one day, two the other...and flyering, and sometimes we'd work on the bar... "What!?" On paper it's hard work, but my god, it was just 24 hour fun everyday. Sure it gets tiring but once your on stage

in a Belt Up show you forget that pretty quickly.

My mental health was slightly tinkered with in Edinburgh after playing easily over a dozen characters, plus my freak Royal Mile creation Giraffe, the northern child who was painted as a dalmatian. I do worry I may have personality issues, especially after performing in Odyssey, the Greek tragedy that offended more Scotsman readers than I care to mention. It was dark it was disturbing, it was the show that I wouldn't let my Mum and Dad see. It did show me another side of people, seeing both eight year olds and OAP's alike take great glee in declaring "I've got balls!" then absolutely battering Dan Wood with a selection of ball pool balls. Odyssey also broadened my sexual horizons, but that's for another blog... 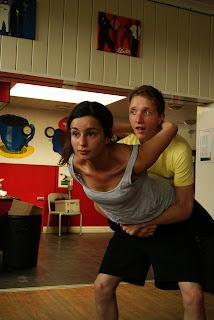 Whether it was Jethro drinking what he thought was apple juice, Marcus making a cameo as Oedipus, Joe continually getting his bloody slides the wrong way round or whenever Dali did anything... it was always impossible not to corpse, and if that isn't the sign of a group of really close friends having a lot of fun on stage I don't know what is. I have made some of my best friends during the last year, and have easily had the most fun ever in my life ever. The scary thing is, I don't know if I'll ever be part of something this amazing again...bugger.’

Chris was part of the ensemble in The House Above playing Magritte in Lorca is Dead, Eteocles in Antigone and Male Puppeteer in Odyssey, he also played Puck in our A Midsummer Nights Dream in York in June.