The Joys of Being Terrified 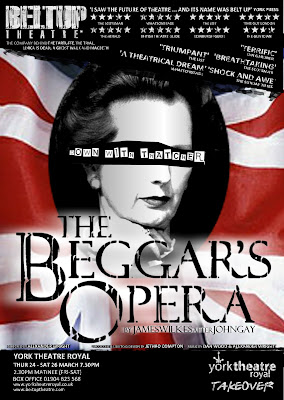 It’s been a while since I was terrified.

It’s strange that years ago when I was a kid I would get terrified and nervous about opening nights, about going on stage. At university I would plan rehearsals and workshops like mad, willing it all to go right. I would sit nail-biting in the corner of a show desperately trying to figure out if the audience were having a good time.

But with every show that I’ve done these feelings grow less and less, little by little. Now I can walk in to a rehearsal and probably know what I need to do, and this is partly down to the people that I work with. I’m quite comfortable in the knowledge that some people will like our shows and some people will hate them, but thankfully the former seems to outweigh the latter.

However, there are two things that have recently re-awoken my scare sensors.

One of these was having an incredible feature in The Observer with companies 1927, Theatre Delicatessen and Analogue. Three years ago I would never have dreamt that we’d be featured in a national paper amongst other companies who are all older and more experienced than us. We all felt quite proud.

It’s great to get this recognition and publicity before we make two big shows: The Beggars Opera in March in the main house at York Theatre Royal, and a site-specific Macbeth in London in April. This is wonderful. This is also terrifying.

It’s quite nice to be terrified again.

I sat all of last week with Dan Wood writing the music for The Beggars Opera. It was a thoroughly enjoyable process and we’re both pleased with the music. But occasionally during this process I look a little step back and said to myself ‘Alex, you’re writing the music for a musical that your directing in an 800 seat theatre. How did that happen?’ And when I put it like that to myself I realised it was quite terrifying.

Last night I watched the press night for To Kill A Mockingbird at York Theatre Royal, directed Damian Cruden, the Artistic Director. It was an incredible show and I became wonderfully drawn in to the steady unfolding of Harper Lee’s tale. But again, just sometimes, during the show my brain took a step back and said ‘You’ve got to do that next month. You’ve got to do a play on that huge stage, with songs.’ And I still found it terrifying.

But it’s a good kind of terrifying. I feel way out of my depth in the best way possible. I’ve gone back to planning rehearsals and workshops and making endless notes in drafts of scripts. Joe, our assistant director, is busy researching like crazy. Dan is busy writing up music. Dom is busy designing with Chris. Jethro is scheduling the world away. James sent through the final draft last night. We have a stage manager called Kim. A production assistant called Laura. Serena is making lists of costumes. It’s brilliant.

I’m scared but I cannot bloody wait to get started.

The cast arrive at the end of Feb and we hit the ground running on the 1st March.

We’re young and making things up as we go along. And we’ve done okay so far, but I think we’re all ready to try and do better.

The Beggars Opera is political. We are in out 20s and work in theatre, naturally us and the ConDem government don’t get along. So we’ve got things to say and opinions to air, which we are doing in the form of Musical Theatre. What’s terrifying is that I really hope people will come and listen and, perhaps because we were in The Observer, people might.