James Wilkes: How I accidentally became a Political playwright* 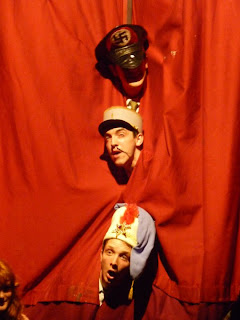 “Political Theatre? All theatre is political. With a small ‘p’ or a capital ‘p’, it’s all political” is one of the pearls of wisdom handed down to Belt Up from York Theatre Royal artistic director (and unsung Scottish philosopher) Damian Cruden whilst we’ve been in residence under his wing. The idea of ‘Political Theatre’ (with a big ‘p’) is something I’ve never really been that interested in to be honest. It wasn’t that I didn’t like it; I just wasn’t intrigued by it. I’m happy to confess that I grew up with that Political apathy commonly attributed to my generation. I was indifferent. Politics were of no interest to me and when I started to write plays they weren’t Political in the slightest, they were surreal and mainly tried to find the most ridiculous use of the word ‘fuck’.


But then something happened. That election that happened last year. Remember that? That’s what happened.

I was pulled into the buzz of the election mainly because of the potential cuts to arts funding. My job is running a theatre company and so this felt like a threat. A danger lurking over the hill. Which party was going to be best for the arts? Labour? They did a war and that. Did they like arts? They’d brought in the ‘A night less ordinary scheme’ – that was nice of them. Or those nice Lib Dem chaps who’ve been sitting patiently in the corner for so long. They seem nice. Quite good policies on the arts too. And that nice Mr Clegg seems lovely. How about the Conservatives? What’s their arts policy? Oh...right... I see.

And then I realised that this was actually the first vote I’d ever have in a general election. What to do with it? So far I was judging almost purely on the arts but then the country changed. Everyone seemed to be interested in this election. More so than anyone had seemed before in my memory – I couldn’t remember the election buzz in 1997, I was more concerned with who was going to win the Intercontinental title in WWE (née WWF). There were all those exciting television debates. That nice Mr Clegg did awfully well didn’t he in that first one? Everyone started discussing the election. Everyone seemed to start becoming Political. And I was too. It felt like an important moment. It wasn’t just about who was going to protect the arts. It was about every aspect. I was now paying tax, I wanted a say in where those taxes went. I wanted to make sure I wasn’t going to be screwed over by policies that weren’t interested in me. All of a sudden I, like so many other people, was Political.

With that I began to appreciate Political satire. Those funny cartoons in the paper which used to be unfunny had now become funny, well some of them. I started properly appreciating people like Armando Ianucci – the perfect combination of Political satire and genius uses of the word ‘fuck’. I had joyfully stepped out of the Political apathy that I’d been in previously (I was young, everyone was doing it).

And then that fateful day in May came. I’ve been told it’s not the ‘done’ thing to say who you voted for but I can say that I didn’t vote for the baddies. Nevertheless that Mr David Cameron assumed the throne with the potentially not so nice Mr Clegg perched uncomfortably on the arm. And then all those cuts happened. And all those places started closing down. And all those people got angry. I don’t need to describe the effect; you can look in a newspaper to see that.

By Politics (with a big ‘p’) I mean the shifts, changes, decisions etc that happen in regards to government. Politics (with a small ‘p’, it only has a big one in this case for grammatical reasons) are those same conflicts in a much broader sense; the often conflicting interrelationships in society, between friends, between family members, between humans. There’s that advert where they’re like ‘are you interested in politics’ and they list a load of things and then they’re like ‘haha, we tricked you, those are politics’ to make people more political, you remember that? They were trying to get young people out of that political apathy. The point is, before there was a definite difference between Big Politics and little – more personal – politics, of course they’re connected but it was easy to forget that connection. Today though, that connection is Prevalent. Big Politics are having a very visible impact on everyday life and it’s this that has shaken a lot of people out of Political apathy. The sorts of protests that only occurred in France are now happening on our doorstep. A Christmas tree was set on fire. Even Prince Charles and his ‘other woman’ were attacked (or they just wound down their windows for a chat depending on who you’re talking to). People are now using their voices and wanting to be heard.

Up until now I'd say all of my plays, and all of Belt Up’s work have mainly been political in that small ‘p’ way dealing with people, how they respond to each other, the world and society. They've never been overtly Political. But then we were asked to put on a show as part of the York Theatre Royal Takeover Festival (a festival set up with the deceased ‘A Night Less Ordinary’ scheme). We enjoy working with established texts and rediscovering them and we eventually settled on a reworking of John Gay’s ‘The Beggar’s Opera’.

The Beggar’s Opera was written as a Political and political satire in 1728 and caused a scandal with the complain-about-culture-Prick the Lord Chamberlain (nowadays he’s been replaced by the Daily Mail and Stephen Green). We wanted our version to talk about today, to put onstage people like Mr Cameron and that nonce Mr Clegg (he’s not actually a nonce but it’s a play on how I was calling him ‘nice’ earlier, clever) and to talk about some of the Politics that are governing the politics of today. Of course we didn’t want to play people of right now, we wouldn’t get costumes for a start, we’d just be wearing our own clothes. The concept became one of setting our version in the not too distant past, long enough ago for the audience to be relatively objective but recent enough to recognise the effects. Ironically, thanks must go to Mr William Hague for the setting, his quip about Cameron and Osbourne being the ‘Children of Thatcher’ inspired the setting of the 1980’s. So in this adaptation of ‘The Beggar’s Opera’ we have a group of ‘beggars’ (they’re not literally beggars) protesting and satirising Maggie Thatcher’s government; A government which has huge echoes with the one we’ve got today. We’ve ended up with a musical that is simultaneously set in 2011, 1988 and 1728. We haven’t let Cameron, Clegg and their chums off the hook of course, they will be appearing onstage but you’ll have to see the show to see in which guises.

* This was going to be called 'Accidental Birth of an Anarchist'. I'm not an anarchist though. It's just a witty (in a wanky way) title that I liked the sound of