It's that time of year again (October to be precise)

Somehow it has become October again. There is of course a rational explanation for it being October again (earth rotating round the sun etc) but it's still surprising.

It's well over a month since the mammoth month that was August and we've just about recovered from our 9 shows at the Fringe. We managed to ease the recovery by doing another show, Macbeth, in the main house of the York Theatre Royal last week. This went incredibly well with packed houses for all three performances 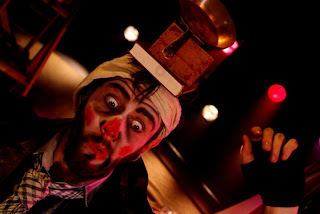 The dust has barely settled on Macbeth and we're heading towards our second show of the month, Elsewhere, a collaboration with the York Theatre Royal's Young Actor's Company for the 2010 Takeover Festival. This will be a site specific piece set in York Explore (York Library) and wil be a bit similar to the piece we did for NSDF earlier this year.

The reason why it feels such a shock that it's October again is because we're back preparing for a run at the Southwark Playhouse this November. It barely feels a year since we were last there with The Tartuffe and The Trial. This time we're taking three shows that some of you may have seen as part of our Edinburgh Programme; Lorca is Dead, Atrium and Quasimodo. For Lorca and Atrium we'll be converting their main space into a cosy study with Quasimodo taking place in their spooky back vaults.

That's just a quick update, there'll be a few more posts coming that talk about the shows in a bit more detail but for now that's where we're at - it's October again and it's getting cold... so we're going underground. We'll be spending a lot of the next year or so underground it seems, that's a little hint at some potential projects coming soon...