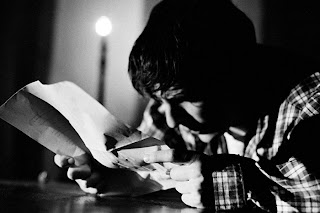 “One of our more ‘Marmite’ shows,” is how Jethro Compton describes Belt Up Theatre’s current venture, The Boy James. “Some people hate it and some people absolutely love it.”

The Boy James began life in 2009 at the Edinburgh Festival Fringe as a sideline to a programme of more high profile performances The Trial and Tartuffe. The show ran every other day and admitted an audience of only 25 people. Compton, who juggles his role as The Boy in the show with his responsibilities as both Producer and Lighting Designer, notes, “It’s weird that two years later we’re still doing it.”

It has become something of a flagship production for Belt Up. Returning to London for a three-week run in association with Southwark Playhouse (where Belt Up have been performing since 2009), the show will then journey to Australia to represent the company at the Adelaide Festival. But how will a new, international crowd take to Belt Up’s mischievous ways? The company is known for its unconventional staging and audience interaction and this show is no exception.

“Basically, the audience are invited into a study, where they prepare to go on an adventure,” explains Compton. “Whether that adventure does or doesn’t happen is not clear.” The Boy James is inspired by Peter Pan and the life of J.M. Barrie. The dialogue between the characters and the audience centres around the idea of growing up – or rather of not wanting to grow up. The character of James struggles throughout the play to bid farewell to his childhood self and put The Boy to rest. “It’s not a narrative show,” explains Compton. “It’s really bizarre in that way. It’s not storytelling in the way we usually tell stories. It’s all about the relationship that the audience has with the character of The Boy and how that starts and ends.”

Compton is quick to admit that this unconventional approach has divided critics. The Boy James has received criticism from some individuals. “I think that’s because it’s not the kind of show you can sit behind a notepad and write about,” says Compton. “You need to be feeling it.” In stark contrast to the negative responses, one of the best endorsements The Boy James could have received came fromStephen Fry on Twitter. He was one of many who left the show at the end of an evening in floods of tears. According to Compton, it can be anything from one audience member with a tear in their eye to the whole lot sobbing. With Fry, (“Just been knocked out by The Boy James – still drying my eyes”) the company struck gold.

“To have the Stephen Fry thing – that gave the show a boost and allowed us to continue doing the show,” remembers Compton. “It’s quite an amazing thing to have the Fry quote because people read The Guardian or whatever paper they read and when they read a bad review they will trust it. When Stephen Fry comes out with a positive quote, people think ‘Well I like him and he likes that so therefore maybe I will like that’.”

It’s easy to consider the mounting pressure on a young company sich as Belt Up. Two 5-star sell-out runs at the Edinburgh Fringe Festival and some high profile admirers must make for high expectations. “We try not to think about that too much,” says Compton. “We started making the work that we wanted to make, telling the stories that we wanted to tell. We’ve always tried to keep that at the centre of it.”

The question of how a production translates from a Fringe stage to a London one is also crucial. When Belt Up made the transition, it found its work didn’t impress quite so effortlessly as it had done before. “When we came to London for the first time, we weren’t just a fringe company that people quite liked,” explains Compton. “There was an expectation of our work. People were like ‘Well there are loads of young companies – what’s different about you?’ and so when people were blindfolded and thrown into a space, they were a bit like ‘Oh no, not this again’.”

Returning to Edinburgh in 2010 brought its own daunting level of expectation from audiences. Coming back after a prior season peppered with glowing reviews, the company were met with an attitude that Compton describes as “Go on then – impress us.” But the company is still young, still learning and still prone to making mistakes – and so it should be. If, as Compton points out, an audience enters a space with ridiculous expectations, viewers are unlikely to drop their guard even with the ten minutes of participatory childhood games that start the show.

Adopting the role of producer for a young company, as Compton has, adds another dimension of pressure. “I never wanted to be a producer,” Compton recalls. “It just kind of happened. I did the lighting which led to doing all the technical side of things which led to being a production manager and doing budgets, and I then ended up realising that the thing I enjoy doing is producing. The more I did it, the more I realised it’s actually what I want to do.” Being taken seriously is still the challenge with which Compton most identifies. He clearly believes that producing is not a skill you can learn on a course – you learn through doing. And there is support available to young producers. The office from which he works is provided by Stage One, a trust set up to help the next generation of commercial producers. So why aren’t more young people getting into production right now?

“Some people see producers as facilitators, which is not what I do,” says Compton, engaging with the common misconception that producers deal only with logistics. “I have an interest in taking a show that I like or coming up with an idea and then putting it together. And the great thing about being a producer is that I don’t have to wait for someone to give me a job. I know so many young people out there who are unable to get work and I don’t have to worry about that because I’m the one making the work happen. It’s a great feeling, especially if the work is successful.”