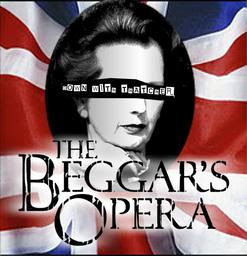 We are into our second week now of Beggar’s Opera rehearsals and things are starting to look good, we had a stumble through this weekend and everyone seems to be gaining a sense of how the show hangs together. As rehearsal goes on however I think we all become more aware of how much we are pushing Belt Up’s own boundaries.

One of the many ways in which we are doing this is by attempting a piece of ‘Political Theatre.’ While other shows such as Lorca is Dead have necessarily touched on politics in the process of telling their stories, this is the first time that the company has attempted to make anything with a definite agenda. This brings very specific challenges.

For one the amount of research that has gone into the show is huge and I have spent a significant amount of the last month reading articles, watching videos and listening to opinions to make sure that the show is informed, current and relevant. My research has taken me from the Anglo-Spanish war of the early 18th Century , through the 1984/5 miners strike by way of the bombing of the Belgrano and onto the current debate over voting rights for prisoners. This research won’t stop until the curtain goes up on the final performance at the end of March, if some huge event happens on the day it will go into the show that evening.

One of the most important parts of the research process began last week when we asked each actor what the show, and in particular the politics of the show, meant to them. While I would never expect all of us to be identical in our political views, I was surprised to hear the wide variety of reasons people had for being involved in this piece of overtly political theatre.

For many people there seemed to be a real feeling that our version Beggar’s Opera might be able to achieve something, that by creating a piece of theatre we might be able to encourage people to question or change their own political views. For others it was about creating something that reacted to arts cuts and a real concern that opportunities might not be available to people of our generation in the future. At least one member of the company was excited about turning their hand to a piece of political and social satire, perhaps as they are a huge Monty Python Fan! There was even one of us who admitted that the show for them was far more about the chance to perform on such a big stage rather than any political agenda.

These reasons have been as important in the way we’ve interpreted our characters as all of our combined historical and political research. The question we have been asking ourselves is how the opinions of George II might sit alongside those of Margaret Thatcher while taking into consideration Nick Clegg’s beliefs (or lack there of) and Laura’s/Dom’s/Serena’s own personal reasons for being in the show. It is a huge challenge as Belt Up isn’t used to tackling political issues, however there is a feeling that if we pull it off we might have created something really quite special.