The rehearsals so far 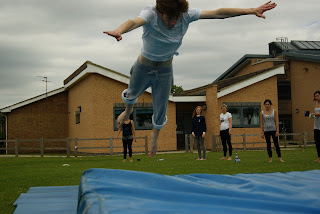 Energy is still surprisingly alive and kicking amongst the members of Belt Up despite 12 hour day of mainly physical work. The excitement is still very much buzzing about the company and there's a real sense that the 9 shows taking part in The House Above are going to be the highest quality work we have ever done, both as a company and as individuals.

We began rehearsals with three days of workshops in which we played about with everything from voice and movement to a session entitled only as 'ballsiness'. The ballsiness workshops essentially consisted of getting rid of all fear and reservations through the use of trampettes and a couple of crash mats - we can pretty much all fly now, or at least fall with style.

The individual show rehearsals began on monday but there's not really much to say about these because we are all sworn to secrecy. All I can say is that there's been a lot of discussion in blogs and reviews about site-specific, interactive, participatory, whatever-you-want-to-call-it theatre having no depth or heart recently... This Edinburgh we're hoping we can prove otherwise... and judging from rehearsals so far we're looking set to achieve this goal.

So, that's a little round up from Belt Up Boot Camp so far, Odyssey and The Boy James are currently being rehearsed at the moment and then it's Metamorphosis after lunch and then Lorca is Dead after dinner - a very busy day but an incredibly exciting one.

p.s. As a little shameless self-congratulatory point, we were listed in the Guardian this week as amongst the 'must see' shows this Fringe - check it out at http://www.guardian.co.uk/culture/2010/jul/04/edinburgh-fringe-festival-preview-2010
Posted by BeltUpTheatre at 03:15